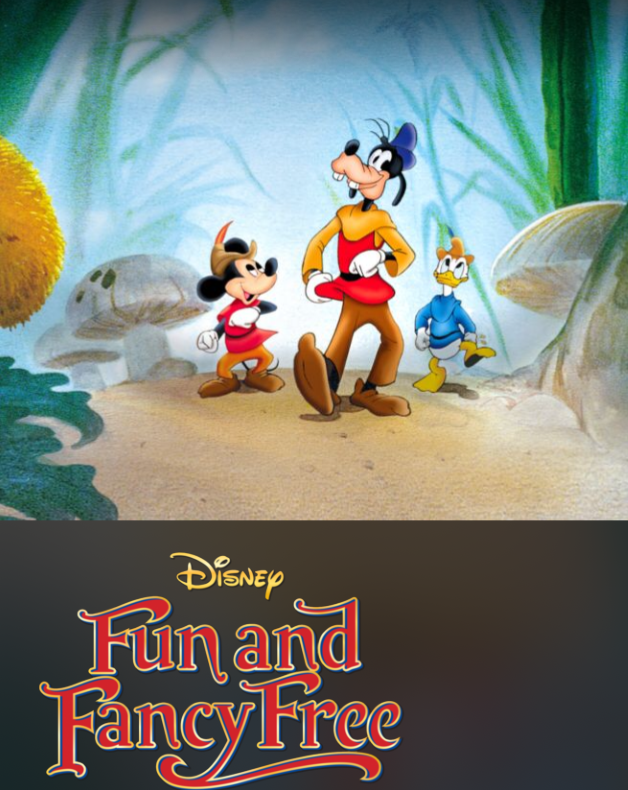 Disney at the Movies – Day 9

Fun and Fancy Free (1947) is ostensibly two, short, animated movies tenuously linked together by the meanderings of Jiminy Cricket.  The first is based on Sinclair Lewis’ Bongo, which tells the story of an affable and talented circus bear who finds the courage to escape from the circus, woo a lady bear and conquer the rival for his affections.  The second is Mickey and the Beanstalk, a retelling of Jack and the Beanstalk featuring the Disney Studio’s biggest stars, Mickey, Donald and Goofy. Try though I may, I never enjoy Bongo, but it is pleasant enough with Dinah Shore providing a musical narration (ask your grandmother).  Mickey and the Beanstalk is far more engaging and satisfying.  It has succeeded as a stand-alone film distinct from Fun and Fancy Free, and is popular enough to have a presence in the Walt Disney World Resort.  Next time you’re in Sir Mickey’s in Fantasyland, you’ll notice the store is imaginatively themed to the final gag from Mickey and the Beanstalk (Hollywood Studios fans will also appreciate a brief appearance of Grauman’s Chinese Theatre, formerly home to the Great Movie Ride and now home to Mickey and Minnie’s Runaway Railway, and the Hollywood Brown Derby restaurant). In the context of Fun and Fancy Free, Mickey and the Beanstalk is presented as entertainment for a young girl’s birthday party hosted by Edgar Bergen.  Bergen, father to Candice Bergen, was a popular ventriloquist, and he brings his beloved puppets Charlie McCarthy and Mortimer Snerd (ask your grandmother) to the party.  Edgar Bergin and puppets, Dinah Shore, and even Jiminy Cricket added value to the film in its initial release, but for a contemporary audience their appearance feels odd.  Still, they flesh out an otherwise anemic soup of a movie while providing a glimpse into pop culture of the not-too-distant past.

The Three Little Pigs saga continues with The Practical Pig (1939). You know the drill;  the Big Bad Wolf is still looking to capture the pigs (for food and by now for vengeance), but while the two idle pigs remain easy prey, the pig named “Practical” remains vigilant.  In this episode, Practical builds a lie-detecting machine.  When the machine catches you in a lie, it punishes you with a good spanking. Needless to say, the Big Bad Wolf gets his comeuppance.

The next short will feature Mickey Mouse’s first encounter with a giant in The Brave Little Tailor (1938).  Mickey plays the eponymous tailor, who is conscripted into hunting the giant terrorizing the land, when his boasts of eliminating house flies is misconstrued to mean “giants.”  The poor fellow is in over his head, but he is inspired by the Princess Minnie.  Spoiler alert, Mickey triumphs over the giant.