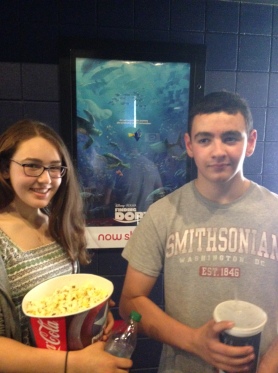 It’s here! It’s here! It’s…what’s here again? Finding Dory, of course, after nearly 13 years of anticipation, finally hit the theaters! It’s become an early summer tradition for my family and some of our closest Disney-loving friends to go out to the new Pixar movie at our local theater the night before the posted release date, so we bought ourselves some (perhaps too much) popcorn and settled into the cushy movie theater seats to watch Disney’s newest release. This ritual offers an opportunity to connect with friends and bounce our thoughts off of one another in regards to the new film. This year, the bar had been set incredibly high by the beloved Finding Nemo, and I was bracing myself for disappointment. My biggest fear was that this movie would be pleasant, but nothing more than a continuation of Finding Nemo, or a reiteration of the same scenes the other way around. Pixar managed to avoid this problem by giving this story a different message. Marlin did have to learn all over again about the benefits of loosening up, but the story focused on Dory and her very real struggle to cope with an affliction. In order for this to happen, Dory had to move beyond her original role as a source of comic relief. Pixar developed her character by building a touching backstory and putting Dory in situations where she was forced to rely on her own resourcefulness. The new cast of characters she encounters along the way are engaging as well. They emphasize both the importance of a strong support network in times of difficulty and the value of the kindness of strangers. And since an especially attractive part of Finding Nemo was the gorgeous representation of the ocean life, I was glad that Pixar maintained this high quality animation style throughout their new story.

But if it seemed a daunting feat for two clownfish to be reunited in the wide waters off Australia in Finding Nemo, the sequel pushes the limits of the imagination. The fish travel farther than before, but the bulk of the distance is covered by only minute or two in the film. Once they arrive at the main setting, the Marine Biology Institute of California, a whole lot of land-jumping and suspiciously effective camouflage effects allow for the story to take place largely out of the ocean. Meanwhile, the challenges facing our fine fish friends become so insurmountable that they are forced to drastic measures, only to face an even bigger challenge, resulting in numerous false endings. One truck scene in particular – you’ll know it when you see it – destroys any plausibility the story might have had. And yet, more than anything, the animators seemed to be having fun with the story, and that kind of silly joy is infectious. I had a tremendous amount of fun watching it, as did the rest of the audience, as evidenced by the enthusiastic round of applause unleashed when the credits started to roll. I’m more than satisfied with this most recent Pixar adventure, and can’t wait until the next one hits the theaters.