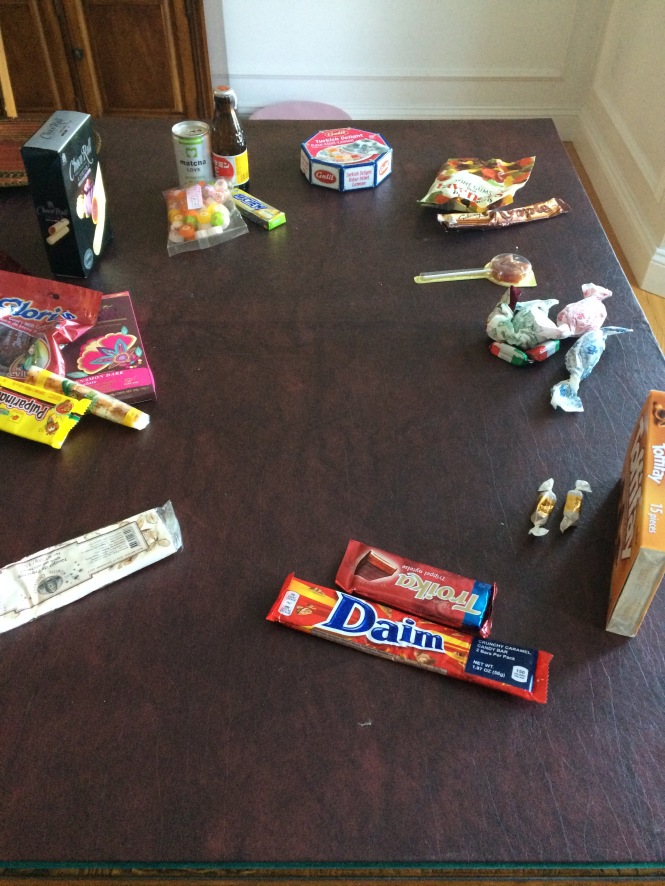 Much as I believe the spirit of Disney is the best souvenir, physical remnants, too, can be helpful, especially when they contribute to an experience. We decided to take the “eat around the world” tradition of EPCOT home by gathering a sampling of unique candy from each country, nation by nation. Fair warning: we may have waited a bit too long after returning home to enjoy these treats, and this combined with the several changes in temperature the candy endured on the journey caused the chocolate-based treats to lose a great deal of texture and flavor. We do intend to carry out this little experiment again (what a sacrifice!), but in the meantime, here you go: our candy-around-the-world-at-home experience!

We started out with China, figuring we’d work our way around to the more familiar desserts. The Choco-Rolls, which I would describe as a cylindrical white-chocolate Kit-Kat, were a huge hit. From Japan, we enjoyed the banana-flavored Hi-Chews (though from past experience I prefer green apple), which are a bit like gum except that they melt in the mouth. The colorful, round sucking candies with little flowers in the middle of them, whose label we couldn’t read, were sweet but had no flavor. One of the drinks, which again we couldn’t identify, was similar – it tasted like a generic sweet soda but had no particular flavor. The matcha love, on the other hand, had plenty of flavor – I described it as string bean water with an aftertaste of green tea, my friend described it as string bean water with an aftertaste of string bean water. I’ll just chalk that one up to our unsophisticated palates, though.

From Morocco we sampled the Turkish Delight, something I’ve always enjoyed eating ever since seeing Disney’s The Lion, the Witch, and the Wardrobe (this is the treat Edmund requests from the White Witch). This box, from the Galil company, came in surprisingly powerful flavors of rose, mint, and lemon. From the UK, we sampled wine gums, which were tasty enough but I can’t attest to how accurate the flavors were, for obvious reasons. The Ripple bar probably would have been delicious, if it hadn’t been flattened, melted, and refrozen in transit. The only unique candy we could find from Canada was a maple lollipop, the taste of which we were all familiar with. We also tried Italian amoretti cookies – light, crunchy, almond-flavored biscuits wrapped in colorful paper. There were tiny chocolates wrapped with the colors of the Italian flag as well, but these chocolates, too, underwent abuse over time that made them inedible. The same went for the Toffifay from Germany, though the caramel and hazelnut layers of these round treats were still tasty. We also tried some classic Werther’s caramel ($0.10 each!) which were, of course, delicious. In Norway we picked up Troika, layers of marshmallow and jam coated in chocolate. It was decent, and a favorite of my dad’s, but not to my taste since I don’t always enjoy fruit-chocolate combos. The Daim, a crunchy bar of caramel coated in chocolate, was a bit squished but still enjoyable. The caramel, salty and crispy, tasted more like toffee to me than caramel.

In France, we were surprised by the sparse selection of candy, since the pavilion focused heavily on baked goods instead. We did taste a honey-nut nougat bar, which was, once again, squished but enjoyable. Finally, in Mexico, we tried out several unique treats. Pulparindo, the spicy, salty tamarind paste, was a bit of a rude awakening, but not necessarily bad. It seemed to be one of those foods that’s an acquired taste. The same goes for the Gloria’s goat milk pecan candies, though these were less jarring. The bar of cinnamon dark chocolate did not, unfortunately, remain fresh or particularly appetizing, so we took a pass on that one, but the coconut roll was uncomplicated and tasty.

There you have it! The Choco-Roll was the best find of this haul, but I’m excited to try the Toffifay and Turkish Delight again – and, of course, to sample some new candies from around the EPCOT world. Though we transported treats from Disney for this particular activity, it’s perfectly possible to collect interesting desserts like these by scouring supermarkets and local ethnic groceries. We might just try compiling our own candy around the world next time, and I encourage you to do the same! Although it’s a simple thing, I feel that getting a taste of day-to-day life in foreign countries is an important part of learning about other cultures, and very much in the spirit of exploration that EPCOT fosters.